Casey Downing Jr. grew up in Mobile, Alabama, attending McGill and Murphy High Schools. It was at Murphy that he took his first drafting class and found the foundation of a passion that would ultimately become his career. After high school, Casey joined the Navy, where he was stationed in Pensacola, Florida. He took courses at Pensacola Junior College and later transferred to the University of South Alabama, taking courses in commercial art. It was while attending a lecture given by sculptor and instructor Jeff Bayer from the University of Alabama Huntsville that Casey found his calling. He transferred to U.A.H., majoring in sculpture and minoring in art history and art education. After college Casey set up shop in his downtown Mobile studio where he has been creating and teaching since 1978. 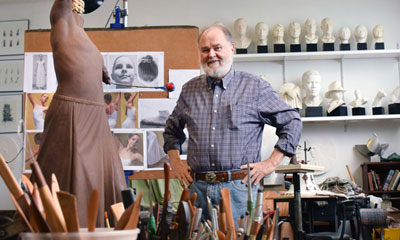 © Casey Downing, Jr. - All Rights Reserved 2023 | Site by FusionPoint Media
Back To Top